SITY: The Big & The Small

Perhaps it may seem silly to write about the little snowstorm we had last week given that we’re still digging out from the blizzard of 2015. But small snowstorms are wonderful. They’re a lot less trouble than blizzards and often more beautiful. It would be a shame to overlook them.

This particular snowstorm was lovely until the snow turned to drizzle. Then the day turned gray. But the kids really wanted to play in the snow, so I took them out, and we stayed outside until we were thoroughly soaked.

While the kids were playing, I tried to take some pictures, a real challenge when the rain is spotting your eyeglass lenses and trying to do the same to the camera lens. But I needed something to do while the kids were up in the observation post of their swing set making snowballs to lob at me. So I gave it my best shot (or shots, as it were). Here are two of them.

First, something big and tall.

I love the way these pine trees grow. They grow so straight, so tall, but keep all their branches at the top. The snow is distorting this one’s shape. It looks like a giant feather duster.

Now for something smaller and closer to earth. 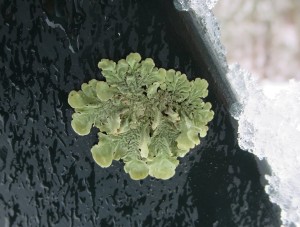 Lichen Growing on the Swing Set

Lichen can be beautiful or hideous, depending on the type and the growing conditions. This one is pretty, like a green snowflake.

This entry was posted in Out and about and tagged lichen, photos, SITY, trees. Bookmark the permalink.

1 Response to SITY: The Big & The Small