The Weight of Snow

The snowstorm of February 4-5, 2016 was a remarkable one. Though I had been very lazy during the winter up to that point, I couldn’t resist the lure of all that snow. I decided to go for a hike.

But this snowstorm had packed a special kind of punch. The snow was unusually wet and weighty, and as I dressed to go outside, my husband said, “Hey, be careful.” When I asked him why, he mentioned the possibility of falling tree limbs. That hadn’t ever been a problem for me before, so I wasn’t that worried about it. I put on my warm clothes and boots and went outside. Here is what I saw as I exited the house.

Is That a Tree or an Umbrella?

The snow had collapsed the pine tree like an umbrella. There were weighted-down tree limbs all around, and at least one noticeably broken one.  The snow often weighs limbs down, though, so I still wasn’t that worried. I headed up the hill, and I was delighted to see the entrance to the path. It looked magical, as it often does in the snow. 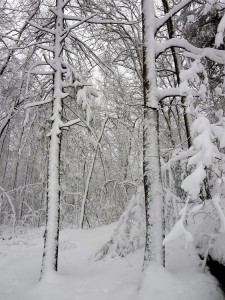 Gateway to a Magical World

I entered the woods, but I didn’t get very far. Ahead were a bunch of small trees that had been pulled over. They looked worse the closer I got. In fact, they were blocking my path. 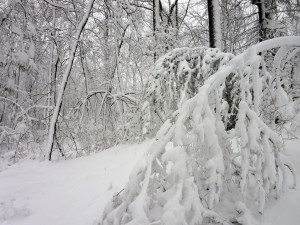 Wow. I felt so bad for these trees that I tried to remove some of the weight. The snow resisted. It clung so tightly that I had to shake the trees violently to knock it off. I started to worry about damaging the trees, though I thought I was probably helping more than hurting. But I was also getting soaked and chilled, especially from the snow that fell on top of me and went down my shirt (brr!).

Meanwhile, I had started to notice the occasional sharp sound coming from the woods. It happened every few minutes. Each one was the sound of a limb snapping. I started to wonder if my husband had been right. Maybe it wasn’t the best time for a hike. Then I saw something to convince me. 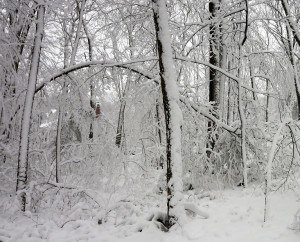 Tree Across the Path

A large tree arced across my path. This was no shrub or sapling, but a very tall tree that had once had a straight trunk. Trees should not be bent like that. It was dangerous, and I needed to leave.

I didn’t go inside quite yet. I still wanted some exercise, so I shoveled part of the driveway. In retrospect, I probably shouldn’t have been outside even for that. I didn’t allow the children out, though, until the snow had melted off the trees. They cried, and I felt bad, but it was a wise decision. Later we heard that two local people had died that day from falling limbs. It was heartbreaking. One of them was a girl about Marshall’s age. She had been playing in her yard when it happened.

I still love the snow. It can be so beautiful. It can be so much fun. But it’s dangerous, too, in a lot of ways. We forget that at our own peril.

This entry was posted in Uncategorized and tagged danger, photos, snow, Winter. Bookmark the permalink.