And now it’s time to wrap up the tale of the baby robins. As you saw in my previous post, they had gotten quite a bit bigger. They soon got to such a size that they filled up the nest and then some. Most of the time they seemed content to squish together in the nest. 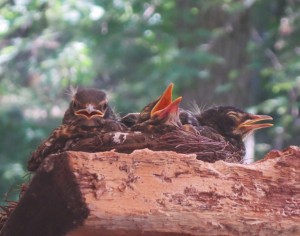 I wish I had a suitable punchline for this picture of the baby robins. Don’t you just love their expressions?

But they were starting to experiment with moving off the nest. 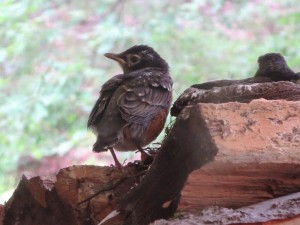 Taking a Walk on the Wild Side

We knew that they would have to leave the nest soon. In the meantime we continued watching them and learning all sorts of things about robins. Did you know that the parents eat the babies’ waste? Yeah, it comes out in a “fecal sac” and the parent scoops it up in his or her beak and apparently swallows it. No fuss, no muss. I had hoped to get that on film, but it always happened so suddenly, I was just never quick enough. But perhaps that’s for the best.

We also learned about some of the things that robins do and do no eat. For example, they definitely do not eat gypsy moth caterpillars, which is a real shame. The caterpillars often crawled around and sometimes even on the robin nest. We kept hoping the robins would notice, and then one day they did. We saw a parent grab a caterpillar that was going up the side of the nest, and we thought, “Hooray! They’re going to eat it!” But no. After snatching it up, the bird flew away with it, a clear indication that the babies weren’t supposed to eat it. I also saw a baby take an experimental peck at a caterpillar, but it must not have tasted very good, because he didn’t take a second peck. Perhaps even more interesting, though, is that robins can eat snakes. My husband swears that one of the parents once brought home a small garter snake for the babies’ dinner. I really wish I had both seen that and caught it on film.

I did get some shots of the babies eating other types of dinner, though. I loved the way they lunged at the food. I was also amazed at how wide they could open their mouths. 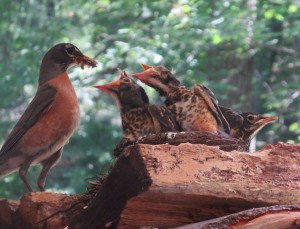 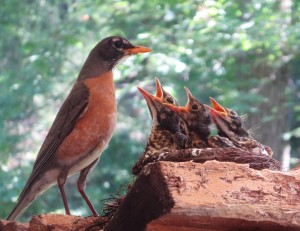 The food is all gone, but they’re still begging.

Then one morning there were only three babies in the nest. We don’t know what happened to the fourth, but we assume he fledged. The next day, the nest was completely empty.

And that was that. Our tiny part in the robins’ story had come to an end. But my husband later saw what he thinks was the father feeding and training one of the fledglings, so perhaps their story goes on.

Now that the babies have moved on, I guess it’s time for me to move on to other subjects as well. I will, but let’s say good-bye properly, with one last picture of the beautiful bird family. 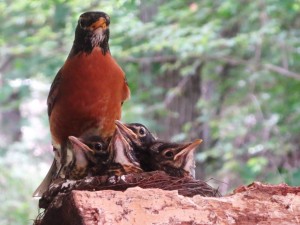 This entry was posted in Uncategorized and tagged birds, nest, photos, robins. Bookmark the permalink.

1 Response to Moving On