On Saturday I walked down the driveway to pick up The New York Times newspaper that was waiting for me at the end of it. As I passed beneath the trees I noticed that there was a layer of greenish-brown slime on the driveway. It had rained overnight, and the caterpillar poop on the driveway had absorbed the water. The driveway was completely covered in this “fecal slime,” and it could not be avoided. I was wearing a nice pair of shoes, so I tried to walk carefully. Still, they were completely encrusted by the time I got to the newspaper and back.

On Sunday, I made the same walk. The slime had dried somewhat. It was now more of a paste. A fecal paste. By Monday, it had dried even more. It was now a fecal crud. It may have been my imagination, but it even seemed to smell like poop. This is what it looked like.

If that weren’t disgusting enough, every day when I’m unpacking the kids lunch bags I find a few caterpillar poops. The poops stick to their ice packs and swell up from the moisture. It’s gross.

The rain may have played a part in knocking their numbers down. It certainly seemed to slow their progress. Now it is time for the caterpillars to pupate, but many of the caterpillars I’ve seen are dead or dying. It’s what we wanted, but it’s still a sad thing. The tree trunks are covered with their corpses. When the caterpillars die, some of them hang upside down, their bodies stretching under their own weight until they become desiccated. Some hang in a V-shape. 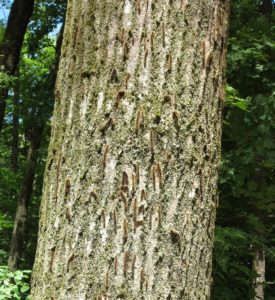 Masses of dead caterpillars are sad. But what makes this especially sad is that the damage is already done. The caterpillars didn’t die soon enough to spare the trees. 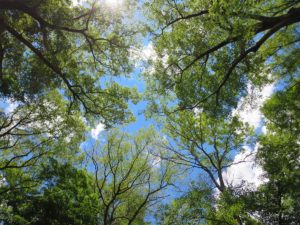 This entry was posted in Out and about and tagged caterpillars, photos, SITY, trees. Bookmark the permalink.