A Walk in the Snow

I went for a walk in the woods yesterday. The snow was still thick on the ground but not undisturbed. Many other creatures had been there before me. Their tracks were everywhere, zigging and zagging and crossing.

Some creatures were easily identifiable by their tracks. 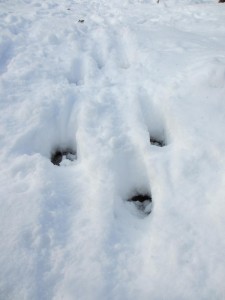 And some were not made by critters at all.

It was a beautiful day, with frosty clouds veiling the sun in one direction. 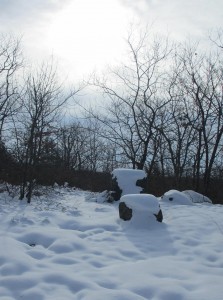 And blue sky in the other direction. 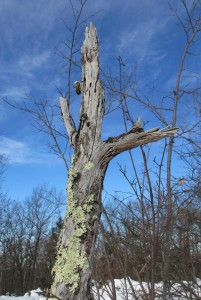 Something about that dead tree compelled me to look closer, and I’m glad I did. The colors and textures of the weather-beaten, lichen-covered wood are so beautiful. 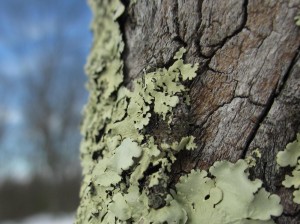 There is an area that I call the Icefalls, because when there is snow and it starts to melt, icicles form along the rock edges. The icicles grow and fuse until they resemble a frozen waterfall. Because the snow is so new, the icicles have only just begun to form and the giant rocks are still fully visible. They have their own beauty. This one looks like some ancient, lumbering beast. 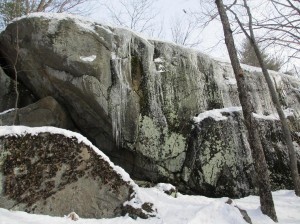 Rocks at the Icefalls

But few of winter’s sights are more beautiful than icicles. They are winter’s answer to fireworks—sparkling and awe-inspiring, but frozen and cold and quiet, like the season itself. 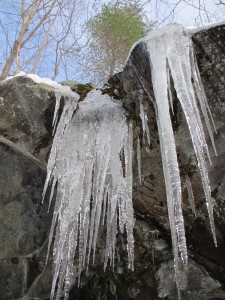 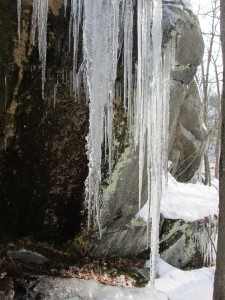 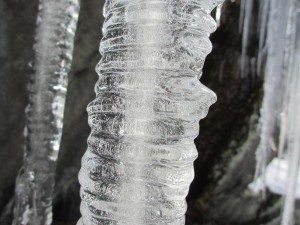 To take these pictures, I had to leave the path and its relatively safe footing. Off the path, there are trip-you-up sticks and foot-grabbing crevices lying in wait beneath the snow. I managed to stay on my feet, thanks in part to my handy ski pole, but I was caught off-guard by the dangers that lurk above the snow. Too bad Marshall wasn’t there to see these “prickers and thorms” that grabbed at my legs. He would have been impressed. 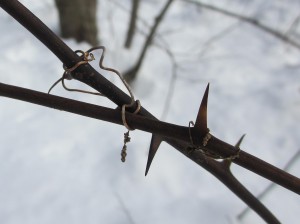 By the time I got home, I was soaked, cold, chap-lipped, and ankle-twisted. And I was practically jumping for joy. There is nothing I enjoy more than walking in the snow!

This entry was posted in Out and about and tagged icefalls, icicles, photos, snow, walking. Bookmark the permalink.

4 Responses to A Walk in the Snow