I’ve had pamphlets from several of Montreal’s sights sitting around in the hopes that I would finally blog about our honeymoon. Now, as I’m struggling to get all boxes unpacked and all my junk organized, it’s time to finally get it done. I don’t remember the order of events but I do remember all the big sights. Here goes.

We spent our honeymoon night in Boston; we had a fabulous and very expensive buffet brunch there on Sunday before heading off to Canada. I had never been to Canada, but I had tried to get there several times before. I had planned to go for my 29th birthday, but that was just days after the 9/11 terrorist attacks, which put the kibbosh on that trip. Then there was the time at Niagara Falls when I was within spitting distance of the Canadian shore but didn’t have my passport handy.

They say that three times is the charm, but I didn’t quite believe we’d make it to Montreal. I thought the car would break down or some other thing would keep us from going, and as a matter of fact, we came very close to having a car accident. While en route, a minivan on the other side of the highway lost control and started rolling over across the median. If it hadn’t lost so much speed once it hit the grass, it would have hit us. I can still visualize it flipping over and over and over again. It was a terrifying scene and it seemed at the time that it did not bode well for our trip.

We made it to Montreal without further incident, however, and what’s more we had a good time, even though our stay was brief. We visited the Basilique Notre-Dame de Montréal, whose interior may well be the most beautiful I have ever seen in a church. 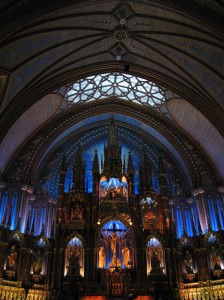 They were tuning the pipe organ while we were there. Oddly, the same thing happened years ago during our visit to Westminster Abbey in London, and I can only assume it is God’s way of punishing me for something, perhaps for not going to church except as a tourist.

We also went to the Biodôme (not to be confused with the Biosphère) and Le Parc olympique de Montréal. At the Biodome, I most enjoyed watching the lynx. They are very cool cats. At the Parc Olympique, we took the funicular (awesome word!) to the observation tower.  According to the literature, “Par temps clair, on peut admirer le paysage jusqu’à 80 kilomètres à la ronde.” Pardon my French, but that means something like, “On clear days, you can see up to 50 miles all around.” It was not the clearest day, but it was an autumn day, and anywhere there was a bunch of trees there was a blast of color.

At the Insectarium de Montréal, they offered to let us hold a spider (we declined). The nearby Jardin Botanique de Montréal was my favorite part of the trip. There we saw the call of nature in action—a fox doing his business on the plants. Hey, he was just your local animal doing his best to keep the garden green. We had tea and some sort of Asian sesame pastry at the Chinese Garden, a place for which I wish I had some pictures. Perhaps Faithful Reader has some on his camera.

Last but not least, we took a walk along the Old Port. Here is the Tour de l’horloge (Clock Tower).

You can see gulls in the picture. Some of them were playing with what looked like little red rubber balls but which were actually cherries. Once we realized how much they liked the fruit, we amused ourselves for a while by picking cherries and tossing them to the birds.

And here, a pretty last picture to leave you with, a demonstration of how colorful was the fall foliage around the time of our wedding.

This entry was posted in Out and about and tagged photos, travel, wedding. Bookmark the permalink.